In the Democratic Federation of Northern Syria, civilians came out to protest the invasion carried out by the Turkish army in the Canton of Afrin. In the city of Amude, Cizire Canton,15,000 people gathered to condemn the attacks. 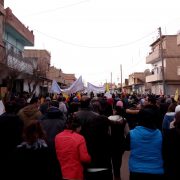 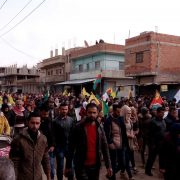 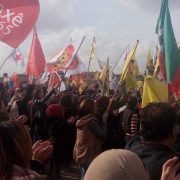 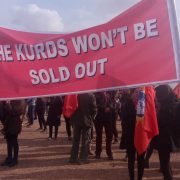 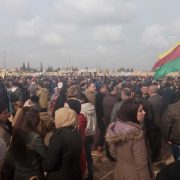 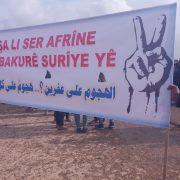 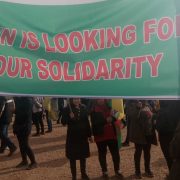 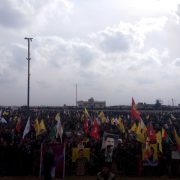 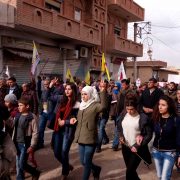 On January 20th the Turkish state initiated its invasion of the Afrin Canton in the north of Syria.

The operation includes four phases and has as its main objective to create a 30-kilometer buffer zone along the entire border, according to statements by the Turkish Prime Minister, Binali Yildirim

The operation has been named Operation Olive Branch. At this time several areas of the Afrin region have been hit as well as other areas in the north of Syria. Towns in the Kobane, Manbij, and Derik regions have also undertaken heavy artillery shelling according to local sources.

FSA groups and the Turkish army are carrying out a joint operation on the ground using a vast amount of armored vehicles and heavy artillery.

The operation was launched from several points along the border Turkey shares with Afrin as well as the Shabba region.

FSA forces have taken over several villages and have successfully penetrated the region according to statements they released, although the YPG dismiss these claims. Videos uploaded to the official YPG account seemingly show the self-defense forces of Afrin destroying two tanks belonging to the Turkish army.

The offensive has included intensive shelling and airstrikes. 72 F-16 fighter jets have taken part in the air raids. 108 of the 113 targets assigned to them have been successfully reached.

The YPG Press Office said that many of the targets are actually residential areas inhabited by civilians. The city of Afrin, capital of the Canton with the same name, has also been hit by the air raids. 6 civilians and 3 combatants – 2 of the female forces YPJ and 1 of the YPG – were killed and there are at least 13 people seriously injured according to Kurdish sources.

Afrin has been for most of the Syrian war a relatively stable territory. Between 300,000 and 400,000 refugees have been sheltered in the canton. The new front will cause a deepening of the humanitarian crisis for refugees and citizens, that amount over 1 million people. The highest ranking officer of the civil administration governing Afrin, Hevi Mustafa, said that “ the injured are mostly civilians.” Turkish officials claimed that refugees are fleeing the area in droves towards the border. The Syrian Observatory for Human Rights dismissed these claims.

Negotiations between Russia and Turkey for the future of Syria

On January 18th, generals of the armed forces and intelligence agencies in Russia and Turkey met to discuss the military operations in Syria. Afrin air-space is under Russian control and its anti-aircraft weapon system, S-400, has not even been fired once. Several sources, mainly Turkish, confirmed the withdrawal of the Russian forces from the canton. This information confirms Russian consent to the Turkish invasion and contradicts past rapprochement between Russia and the Kurdish political forces, which had seemed to agree on the possibility of granting autonomy to areas of Kurdish majority. These new circumstances have led the population of the Democratic Federation of Northern Syria to feel betrayed by Russia.

For his part, Bashar Al-Asad told the state-run news agency SANA “The brutal Turkish aggression against the Syrian city of Afrin can be traced to Turkish policy from day one of the Syrian crisis, which has essentially been to support terrorism and terrorist organizations.” The territory under Turkish influence includes the regions of Jarabulus and Al-Bab. But the Damascus government could well gain footing from the clashes between the FSA forces and the YPG, as the two military opposing forces could be mutually weakened. However, the doubt arises as to how the Syrian government will regain territorial sovereignty once Turkey takes control of the territory.

The Co-Presidency of the pro-Kurdish party HDP in Turkey has strongly denounced the attacks on the population of Afrin. Several towns have organized rallies and demonstrations against the invasion and to protest Erdogan’s policies. Turkish police answered violently and repressed these demonstrations; as well as preventing a press conference to be held in the provincial headquarters of the HDP in Diyarbakir. The conflict with the Kurdish population in Turkey has worsened in the last 5 years and with the invasion of Syria, tensions could escalate easily.

On January 18th the spokesperson of the United States Department of State, Heather Nauert, asked the Turkish state not to adopt an offensive position against Kurdish forces, allied to the US in the fight against ISIS. But Turkey considers the military supplies delivered to the YPG as a threat. “The United States sent 4,900 trucks of weapons into Syria. We know this for sure. This is not how allies behave.” Turkey considers the YPG an offshoot of the PKK, an insurgent group that, for the last 30 years, has confronted the Turkish state. Ankara denounced the US plan to train 30,000 combatants in the northeast of Syria in coordination with the SDF. This information was denied by Washington.

The development of the operation in Afrin has sparked reactions from the international community. France’s government called for an emergency UN Security Council meeting, saying that “these attacks must be stopped”. Iran’s government has demanded that Turkey put an end immediately to the operation. Likewise, several demonstrations were held yesterday throughout the world. YPG’s and YPJ’s popularity, owed to its fight against ISIS and terrorism as well as the participation of internationalist combatants in its ranks, has generated a wide support in the public opinion of many countries.