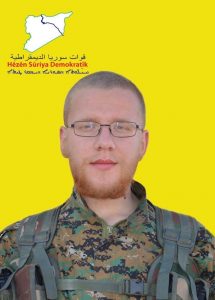 On 16 October 2019 Andok Cotkar, Konstantin, from Kiel in Northern Germany fell in an air raid in Serekaniyê, Northern Syria in the course of the war of aggression of NATO member Turkey.

In September 2016, Heval Andok joined the YPG People’s Defense Force in Rojava, Northern Syria, to become part of the fight against the IS. He was involved in battles on various fronts against the IS in the Minbic, Cerablus and Raqqa regions.

After an injury he was back home for a while, but then returned to Kurdistan and was last in the resistance units of Şengals YBŞ to defend the Yezidi people from further genocides. With the start of the attacks of the fascist Turkish state and its jihadist mercenaries, he immediately volunteered with many other friends to defend the Revolution of Hope that had been flourishing in Rojava since 2012.

Like many other fighting friends and people, he gave his life in the resistance against fascism and in defense of human dignity. At a time when all rulers from Trump to Putin to Kamp-Karrenbauer surpass each other with betrayal, hypocrisy and bloodthirsty profit interest, our friend and companion Konstantin Andok is truly a hero of our time.

When Constantine set out from his home on the Baltic coast, he tells no one about his plan. So he got on the plane to Kurdistan on the international anti-war day, September 1, 2016. Only on the way he informed his family, who since then, like many other German families, have perhaps become at least a part of the fate of the resistant Kurdish people. Konstantin was not a former soldier or left-wing activist like many others who joined the YPG. He was simply a man whose conscience could no longer tolerate the atrocities of the IS and its allies and therefore followed his heart as he joined the resistance to defend the peoples of the Middle East and for a democratic, ecological society and women’s freedom.

We got to know Heval Andok as a very modest and grounded person. Just as he was arriving in Rojava, he answered the question where he was from: “From Kiel, bourgeois settlement”. Konstantin previously worked as a farmer from where he got his surname Cotkar. He used to speak in low german dialect and made himself very appreciated by all his friends with his natural, generous attitude and his typical Nordic humour.

After he was injured in Rakka he said in a television documentary: “When I return to Europe I look forward to seeing my family again, my friends again and also my former bosses. And I look forward to working as a farmer again. At least for a while, because it’s fun too.”

He didn’t think much of academic discussions about political theories, rather wanted to learn practically how to do his duty in the struggle with the YPG, how to protect himself and his friends and the population. However, he also read Abdullah Ocalan’s ideas of Democratic Confederalism with curiosity and always actively participated in discussions. But the fact that he was above all a man of action and practice was shown by the fact that he also saved the lives of many friends as a front paramedic and distinguished himself through his tireless commitment and co-operative spirit. For him, Rojava was the place where he could truly express his own personality and abilities, and where he was always too happy and joyful to be part of the community of his Hevals.

After his return to his northern German homeland and in the course of the occupation war in Afrin of the fascist Turkish state, which was only a foretaste of the current attack, he kept in touch with Kurdish society and tried to get involved there as well. The state reacted to his return with accusations of terrorism, whereby as a NATO member they themselves were always part of the project of green belts (jihadist forces) against progressive socialist movements in the Middle East and to this day nurture the terror of the fascist state Turkey and its jihadist murder gangs as important allies. This year alone, a quarter of a million euros of armaments were delivered to Turkey by Germany. A historical brotherhood of arms since Bismarck and the Ottoman Empire. A common ideological line of fascism from Atatürk via Hitler to Erdogan. The descendants of the victims of the genocide of Armenians, Yezidis, Suryoye, Alevis and Kurds of the last century, then fled to northern Syria, are today again the same as those affected by expulsion and ethnic cleansing in Rojava.

But those who carry the resistance against fascism in Germany, Italy or Spain of the last century in their memories and hearts are precisely those who today again take up the responsibility to defend human dignity against the barbarity of capitalism. Today this struggle is taking place in Kurdistan on behalf of all humanity. Heval Konstantin Andok felt and understood this. Therefore it did not last long in Europe, he persistently tried to return to Rojava after a few months. As he himself said, life in Germany had lost its meaning, life had a meaning only with a clear goal in mind. For Heval Konstantin Andok this meant being part of the hope that Rojava gives to the whole world and defending it. That is why he will never be forgotten for us and leaves us with a great responsibility.

Also in memory of anti-fascist and anti-war activist Anni Wadle from Kiel and Heval Konstantin Andok’s close companions Anton Leschek, Michael Israel and Ryan Lock as well as all those who died in the fight for humanity, we express our heartfelt sympathy to Konstantin’s family and all friends. We will carry their dreams in our hearts. If we offer resistance, Heval Konstantin Andok will be with us with his heart and soul both at the front in Kurdistan and on the street of the metropolis and will give us the strength we need to finally put an end to madness. We will continue your struggle. They can never stifle the search for freedom and justice. Because resistance is life, therefore at that time up to today “no forgiving – no forgetting” all together against fascism.

Şehîd namirin – The martyrs are immortal!

Long live the revolution of Rojava!