After two days on the road with the Kurdish Youth Movement, our feet are sore and our throats hoarse. In the end, a thousand-strong torrent of youth were beaten back by the gun-butts of the Iraqi Kurdish peshmerga as they attempted to cross the Tigris river border and join a “human shield” defending the Qandil mountains area from Erdogan’s electorally-motivated invasion.

But we left with our heads held high, knowing that the struggle to resist genocidal Turkish aggression is taking place within Rojava itself.

For many of us, this was our first political protest here in Rojava. The atmosphere was strikingly different to the cluster of limp flags you might have seen in the drizzle outside Westminster or the Reichstag following the invasion of Afrin – at once more organised, more united and more electric.

“It was important to see how the movement is organising people,” said Commune member Heval Tolhildan. “It’s not just one and a half hours then you go home. You’re walking two days in the sun, sleeping outside, really doing something together… and the people are still dancing at the end of the day.” 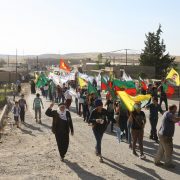 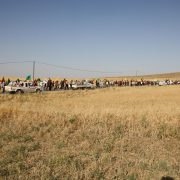 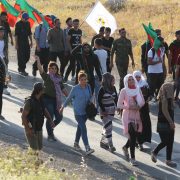 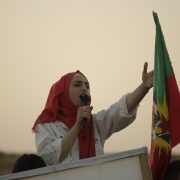 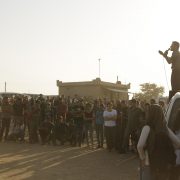 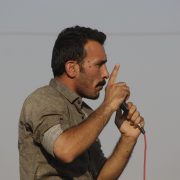 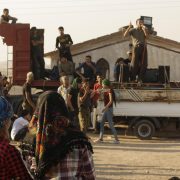 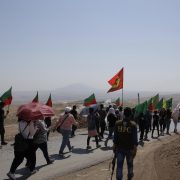 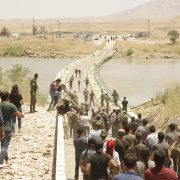 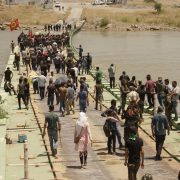 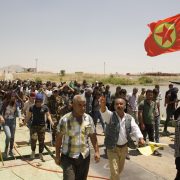 We left in two disciplined single-file columns, male hevals to the left side and women to the right. Uniformed YCR members kept a brisk pace at the head of the column, and the meşa direj (long march) made an impressive spectacle for the villagers who lined the way. They waved peace signs and offered water as we passed by their homes, in a procession which snaked for kilometres through the mountains. This unity and cohesion put faction-riven Western protests to shame.

“I am ready for everything,” said 20-year-old Hîwa, an agriculture student from Qamishlo. “We are ready to go to Qandil, to our cousins and friends. They martyred themselves for us, they gave everything… we can’t stay at home, we must go out and support them.”

Youth from across South Kurdistan have already arrived in Qandil to form what they call a “human shield”, as Turkey claims to have killed scores of people in bombing raids in recent days. Like other members of the youth movement, Hîwa said he saw no difference between the slaughter of his Kurdish kin in Qandil, the coming Turkish onslaught in Manbij and the ongoing butchery in Afrin.

“The Kurdish people are strong,” he said. “And they became strong because they were attacked. The Turkish state is against every free person, but especially the Kurds.”

When night fell we regrouped in a small mountain village, where the dancers came together to kick up dust-devils before a lamplit stage. We slept below the stars and struck out early for the Simalka border crossing. By the time we approached the border on the second day the column had straggled out into something resembling a Mad Max convoy. Plumes of dust flared around ramshackle water-tankers and sound-systems jury-rigged to 4x4s, leaking oil and covered with keffiyeh-clad youth brandishing lurid flags.

A key principle for the movement is wilatparez – not patriotism exactly, but a love of and desire to protect (parez) one’s own land. The youth never stopped dancing and chanting revolutionary slogans, but as the convoy stretched out they formed clusters around separate sound-systems and chanted the names of their cities: Qamishlo, Derik, Kobane.

Asked why he joined the protest, 19-year-old Achmed from Hasekah said: “I love my home, I love my city, I love Rojava and I love the people here.” In this way, wilatparez can supercede local rivalries to form the basis of a revolutionary political identity.

It was striking how many Arabic-speaking youth were present – at points we started speaking Kurmanci only to find no-one we were marching alongside knew the language. This is an important step for the movement, which continues to work to introduce non-Kurdish communities to the revolution and its principles.

Likewise, it was important for the raucous young men of the youth movement to hear equally-raucous women in hijab screaming revolutionary slogans into the microphone, and as the day wore on the two lines of men and women soon broke up and commingled in dance. “We came to have a voice, for the youth and for young women, because we didn’t have one in society before the revolution,” said Avrin, a member of the women’s youth movement. “We march not just against the attacks of Turkey but also for a start to the improvement of life for young women.”

The long march was for Qandil. But it was for the unity of the multi-ethnic, feminist, youth-led Rojava revolution as well. On the second morning, we walked behind a wrinkled old man perhaps aged in his 60s, proudly brandishing a Young Women’s Union (YJC) flag.

At the border, on the other hand, we met violent resistance from more sectarian Kurdish forces. Iraqi Kurdish peshmerga in the pay of Masoud Barzani’s KRG beat back the crowd with their Kalashnekovs to chants of “betrayal!”

“I don’t support the borders (between Kurdish regions),” said Achmed. “In the past, the (Iraqi) Kurds and the peshmerga did not support the YPG/J… now they should unite together with Rojava.”

But Barzani has chosen to lick the boots that trample his Kurdish kin, even placing the blame for the violent assault on Qandil on the very Kurdish militants the Turkish jets are targeting.

The youth several times surged across the bridge, overcoming lines of asayish (local police) and sprinting back across with flags flying in the wind. It certainly did not feel like a defeat. “I felt a difference in how they were shouting (compared to in Europe),” Commune member Tolhildan said. “They were really motivated and angry, they really had morale… it gave me power.”

In a blazing speech which held the crowd rapt as he delivered it from the back of a pick-up truck at 5.30AM, a YCR member made it very clear that the “fascist Turkish state” would never stop its ceaseless expansion at Qandil or Manbij. It was the responsibility of the youth, he said, to get organised and continue the resistance.

In the West, a half-hearted march from A-to-B is the political pinnacle of many people’s week – if it happens at all. Here, where struggle suffuses society, it is just the beginning.

They will return to the Youth Union of Rojava, the Young Women’s Union and the Democratic Students’ Movement as we returned to our commune – knowing that the revolution is being defended in the mountains, but in the hearts and minds of the people as well.

Rojava to Bașur: Internationalist Commune to march on border with Kurdish youth

A perspective on the Turkish election from Rojava