In the time of the attack of the Turkish army and its jihadist allies we depend on your financial support. Activists of the Internationalist Commune are taking place at different places in the defense of the revolution. Our media team is preparing articles, videos and photos to share to the outside. If you want this work to continue please support us.
222 € of 1000 €
Donate Now!

Here is our newsletter reviewing the months of Mai and June 2020. In the following, we want to share with you some information on the actual situation of the Revolution and about the ongoing Turkish war of aggression in Basûr (Southern Kurdistan, Irak) and in Rojava. As well we share with you our last publications from the Internationalist Commune, of Make Rojava Green Again, and of the campaign RiseUp4Rojava.

# Worldwide Call of Actions for the 18th and 19th of July! Stop the Turkish invasion of Basûr and the attacks on Rojava!

As detailed below, Turkey is right now invading the Free Mountains of Basûr (South Kurdistan, Irak) and continues to bomb and attack Rojava, the Maxmur refugee camp in Irak and the Êzîdî region of Sengal, all places where democratic confederalism is put to practice. Against those attacks, the Internationalist Commune and the campaigns Women Defend Rojava, Rise Up 4 Rojava and Make Rojava Green Again made a Call for two Global Action Days the 18th and 19th of July. Make Rojava Green Again also made a special call to all ecological groups and movements, and to all people who feel and
see themselves as ecologist to join the demonstrations and actions, explaining why all ecological struggle should also be a struggle against all wars of aggression.

Join the actions of the 18th and the 19th! Block, Boycott, Occupy!

In our last newsletter, we were describing how the illegal war of aggression that the Turkish state is raging against all democratic, ecologist and feminist movement in the Middle East is an alternation of “hot” and “cold” phases of war. Indeed, the war never stops: it alternates on the one hand between intense phases of fast military confrontations that lead to exchanges in territories and on the other hand of phases of low military actions but high diplomatic and intelligence work.

If the start of 2020 was more on the level of psychological and propaganda warfare, this phase is now over, letting place to full military attacks from the fascist Turkish state. The premise of the war started the 15th of June, when more than 30 Turkish planes bombed again the refugee camp of Maxmur, the Yezidi region of Sengal and the mountains of Qandil in Irak – all places where democratic confederalism is put to practice. Some days later, the military offensive started when the Turkish army sent a massive amount of ground troops, supported by planes, helicopters and drones over the borders of Irak in the Kurdish region of Haftanin, trying to invade this guerrilla-held mountainous region. Since then, ferocious fights are happening there as the resistance of the guerrilla doesn’t allow the Turkish army to progress in the heart of the mountains, inflicting the invaders big losses. The 23rd, Turkish drones also stroke a house in Kobane, Rojava, killing 3 civilians members of the Kongra Star (the umbrella organization of th 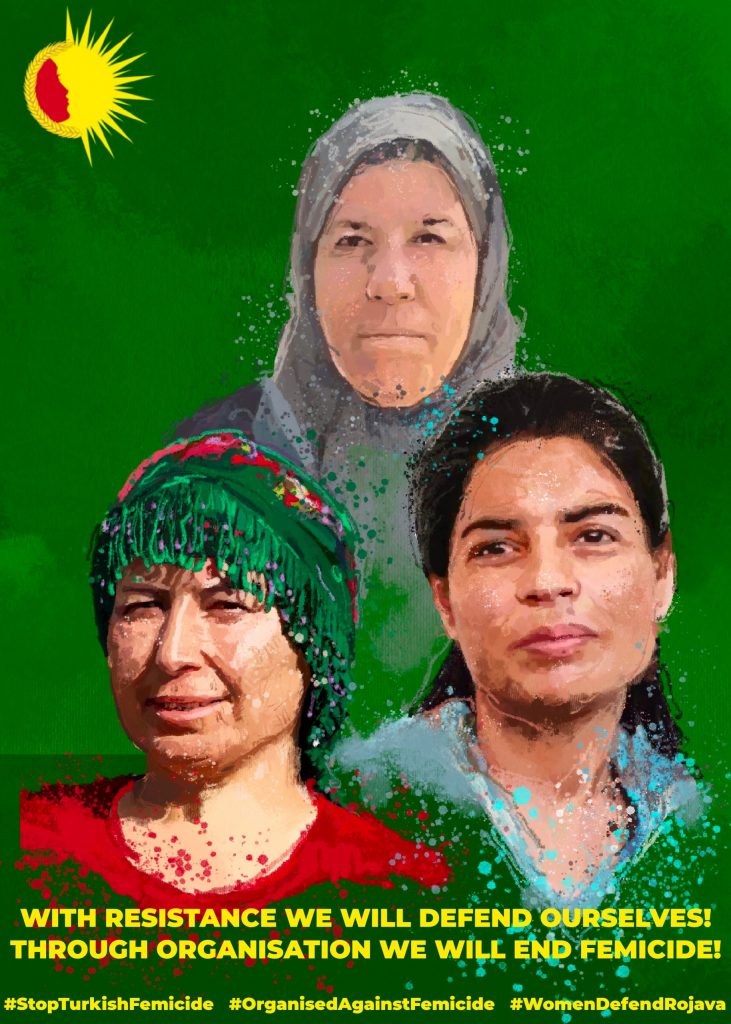 e women’s movement), while the 25th a Turkish drone stroke a picnic area in the region of Suleymaniya (Basûr, Irak), wounding civilians. Both those strikes against civilians produced big waves of protest in both Rojava and Basûr against the Turkish invasion(s). The three women, Sehid Zehra Berkel, Sehid Hebûn Mele Xelîl and Sehid Amina Waysî, were all active members of the Women’s Movement and have been buried in the cemetery of Kobane. Until today (04.07.2020), the war continues in the Mountains of Basûr.

Turkey follows 2 main goals with those attacks. The first one, is the will of Turkey – tolerated, if not supported, by NATO, the US and Russia – to crush the democratic, ecologist and feminist movements and places of the Middle East. Indeed, the Autonomous Administration of North-Eastern Syria (Rojava and the liberated Arab areas), Maxmur, Sengal, the guerrilla-held Free Mountains of Basûr and Rojhilat and the attempts in Bakûr (North Kurdistan, Turkey) to organize democratic municipalities are all part of the same struggle and have the potential to spread democratic confederalism in the Middle East and in the world. Therefore, they represent a threat to the Turkish state nationalist, imperialist and patriarchal politics and it also opposes the development of capitalism in the region. On the other hand, Turkey is also pursuing its Neo-ottoman goal to recreate a Turkish empire according to the borders described in the Missak-i-Milli (the Turkish National Oath, written by Turkish nationalists at the beginning of the 20th century and that Erdogan still claims to follow in official meetings and on the presidential website) which comprises Rojava and Basûr. And this could, if not for the guerrilla, become reality as the foreign minister of Turkey recently said they would not stop their invasion till they would arrive to Suleymaniya (which means to take all Basûr).

In all those actions, we clearly see an attack on democratic confederalism everywhere. The actions are carried by Turkish troops, but it could never be implemented without the agreement of NATO, the US or Russia. Indeed, Turkey is now invading and regularly bombing civilians on both Syria and Irak national land, against all international laws. US, Russia and NATO allow it and furthermore also push for it. It is a permanent attack from the capitalist modernity forces on the achievement of the Revolution.

As part of the forces struggling for democratic modernity, we need to take to the streets to stop those attacks!

In a time where most countries start to de-confine and where life seems to get back to the old capitalist “normality” with all the pollution and the exploitation of nature and of humans that it implies, it is necessary to analyse what happened during those last months of quarantine to see what we can learn from it in an ecological and social perspective.

In a series of 7 videos, our members of the Make Rojava Green Again campaign in Rojava, Poland, Uk, Italy, Switzerland and Germany discuss the authoritarian and anti-democratic way Nation-States faced the crisis, on the other hand what was the popular and grassroots answer and what could be the way to organize in the future to build an ethical and ecological society.

On the Corona crisis in Rojava, we had the chance to make an interview with an internationalist health worker which describes how was the crisis here, but also presents the challenges of the embargo and the war on the health sector.

# Reflections and perspectives from and for the revolution

At the forefront of the Rojava Revolution is the Women’s Movement and the new science that they developed: “Jineoloji” (the science of the women). The concept of Jineoloji is often poorly understood in the west. Therefore we shared an amazing video made by Jineoloji.org where a comrade explains what the Science of Jineoloji stands for. We also posted an article on how Jineoloji and Internationalism are connected.

On another topic, we sadly received the news of the martyrdom of a great comrade Şehîd Kasim Engin, Kurdish revolutionary who grew up in Germany and worked there for the development of internationalism before he joined the Kurdish Freedom Movement. We published two articles in his memory, the first describing his life as a pioneer of new internationalism and a second that Şehîd Kasim had written in the memory of a socialist fighter: Şehîd Bager Nûjiyan, a German comrade who fell Şehîd in a drone attack in the Free Mountains of Kurdistan.

The campaign has been quite active in the last months practically and theoretically. We of course had our general maintenance work at the Commune campsite that we shared in our Picture gallery of April-Mai, but we also went to help with the coriander harvest in the village of Carudi. In the video, we give an idea of how function this almost entirely cooperative-driven village. 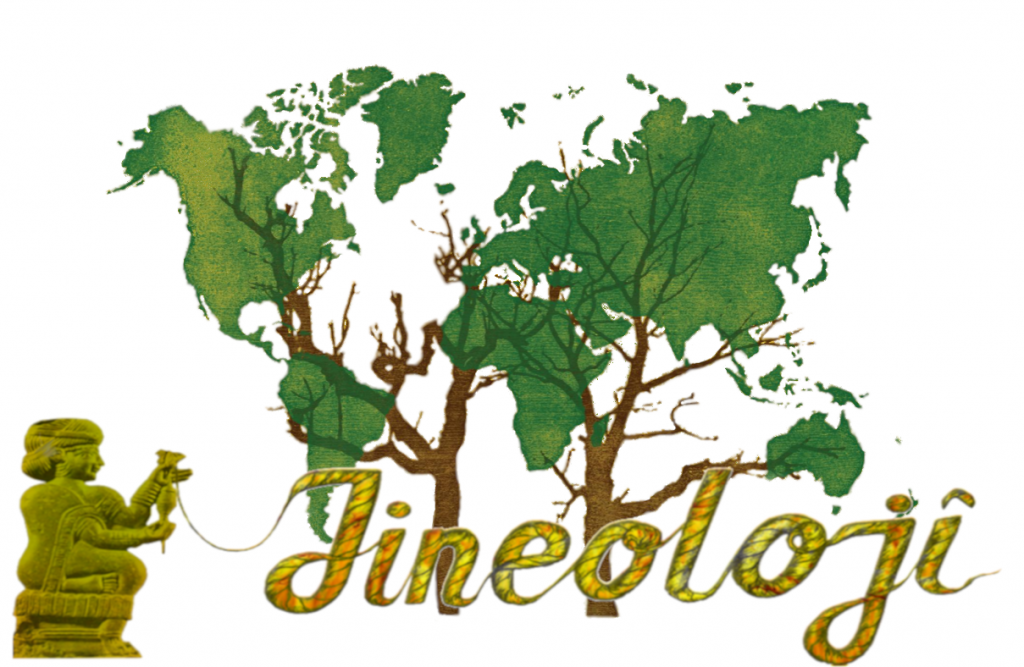 On a more theoretical level, we shared an online only additional chapter to our book Make Rojava Green Again on Jineolojî and Ecology – links between women’s liberation and nature. Indeed, our book lacked this very important aspect of our ideology. Democratic Confederalism, the system on which Rojava is based and that has been developed by the Kurdish philosopher Abdullah Öcalan, is more than just ecology and radical democracy; it’s third and essential pillar is the Women’s Liberation.

We also shared a online presentation we made for Rete Kurdistan about the ecological situation in NE Syria and the Make Rojava Green Again campaign. In it, we show:

Finally, we celebrated the success of the Water for Rojava campaign of our partners from the Solidarity Economy Association, which has been able to raise more than its planned goal of 100’000 Pounds in support of water projects in Rojava!

The RiseUp4Rojava campaign has become an important reference point for many people who feel connected to the Rojava revolution and who defend its achievements. Since the war time of last octobre and during the fierce attacks on Rojava, the campaign made the global solidarity with the revolution visible and united the democratic forces against Turkish fascism and the occupation of Rojava.

Read their worldwide call to defend the Rojava Revolution, as well as their Statement and Call regarding the recent attacks by the fascist Turkish state and their Audio message from Rojava, 20th June 2020 where they explain the link between the Rojava Revolution and the Free Mountains of Kurdistan and why we have to support both as part of one same fight for Democratic Modernity.

Music is an important tool to spread the passion for the revolution as well as for recovering and keeping alive our history of resistance. Through this YouTube channel, we want to share songs and videos of resistance and internationalism from the Free Mountains of Kurdistan and from all over the world. We started by charring “Cenga Haftanin – The War of Haftanin” that narrates the resistance of the guerrilla against the first and unsuccessful attempt of the Turkish state to invade the region in 2019. Haftanin shall not fall! We then shared the song “Revolt” in Sorani, which is an internationalist call for resistance and uprising “from Chile to Rojava”. Lately, we shared “Rojava Marsi“, “The March of Rojava”, written in honor of the women and men who took back Kobane from the hands of ISIS in 2015.

Subscribe to our channel “Internationalists Rojava” to see our future songs.

The war in Kurdistan is always also a war for public opinion. If nobody’s looking, the leader of Capitalist Modernity and the fascist Turkey will for sure not hesitate a second to liquidate the Revolution. But if people are following the situation, spreading the news and organizing resistance, it represents a very important pressure that maybe cannot change everything by itself, but surely changes the diplomatic situation.
Therefore, we want to share some pages with you, where you can get information in different languages about the developments in Rojava, Kurdistan and the defense of the revolution in Europe.

We would like to thank all those who contributed with their donations, translations, transcriptions and much more to the success of the work of the Internationalist Commune and of Make Rojava Green Again.
Revolutionary greetings,